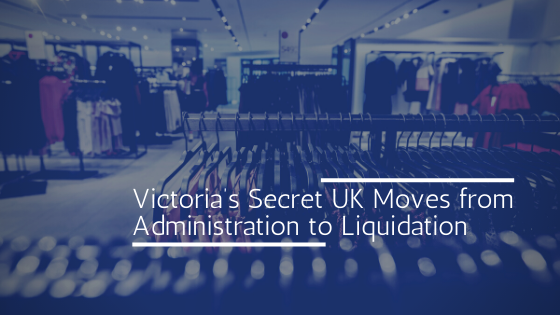 For years, Victoria’s Secret has been a popular choice for lingerie, swimwear and nightwear, while also increasingly catering to a more active consumer base, offering sportswear as well. However, this evolving product catalogue wasn’t enough to keep its UK-based branch, Victoria’s Secret UK from going out of fashion. Now, this branch has moved out of administration and into liquidation altogether.

Victoria’s Secret is one of the world’s most recognisable womenswear brands and the largest lingerie retailer in the US. However, here in the UK, there were signs of trouble when it came to the brand’s Companies House accounts. Accounts were last filed in early 2019, and statements haven’t been filed since May 2020. Administration occurred in June 2020, at the height of the first wave of the COVID-19 pandemic.

Moving from administration to liquidation is a major undertaking for the brand, signifying that the company has transitioned from calling in administrators to repay debts to creditors to something else entirely. Liquidation means Victoria’s Secret UK is rendered insolvent and no longer able to meet its obligations, resulting in the legal ending of the brand in the most final sense of the word.

Victoria’s Secret UK was precisely the kind of retailer to face the most adverse business conditions at the height of the pandemic: it was heavily indebted and making losses which were only getting worse with time. As its line of fashion was very much based on customers trying its products on for size in person, lockdown was always going to spell disaster for the brand.

The retailer opened its first UK store in Terminal 5 at London Heathrow Airport, followed by a large store in Westfield Stratford, but began to struggle staying relevant. It was hit by a cultural appropriation scandal in 2016, and faced stiff competition from a growing demand for athletic wear from the 2010s onwards, as consumer habits turned away from lingerie towards a more fitness-based style of dressing.

Sales declined, and a last-minute attempt to pivot towards sports bras and athletic wear failed to improve the brand’s finances. Those making an acquisition in retail must bear in mind that the most successful brands are early adopters of the latest trends, not slow-moving and unreactive until sales begin to plummet. Victoria’s Secret UK was once considered top of its game, but even the largest lingerie brands can lose favour, reflecting a need to be receptive to the ever-changing fashion tastes of the UK consumer.