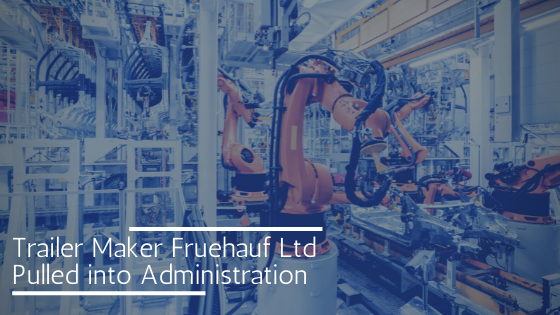 The pandemic has turned old assumptions on their head, and even the most apparently industrious businesses can find themselves floundering when the economy takes an unexpected turn for the worse. Founded in 2010, Fruehauf Ltd specialised in rigid and tipper trailers for use in road haulage. Now, it has collapsed, having struggled to get its show back on the road since the pandemic.

In the latest figures submitted to Companies House, Fruehauf Ltd appeared to be a healthy business as of September 2019. Turnover dropped slightly from £26.2 million in 2018 to £23.7 million, suggesting the company was very capable at churning out a fairly consistent number of manufactured products ahead of the pandemic.

The operational costs and the large debts Fruehauf had accrued over a decade may have been slowly eating away at turnover and its assets, which might have constrained the company and limited its scope for potential growth in the future. Despite this, Fruehauf was a business capable of high turnover, and now it is in administration, eagerly awaiting a buyer to potentially turn it back around in the right direction.

Manufacturing has been a sector which has battled with rapid change in the past. As we wrote previously, automation forced manufacturers in the 1970s and 1980s to invest more in robot production lines in order to boost productivity. Fruehauf Ltd faced a totally different change as a firm since 2020: the pandemic resulted in much of its workers being placed on furlough.

At a time when the company needed to keep the production lines running, demand might have faced a once-in-a-lifetime setback. When the pandemic cloud is finally lifted, a new business agenda could turn the successor to Fruehauf around, when it is finally bought out of administration. If a phoenix-from-the-ashes revival isn’t on the cards, asset stripping could still yield greater returns for buyers who know where to look.

No Responses to “Trailer Maker Fruehauf Ltd Pulled into Administration”