Suite Hospitality Ltd Collapse is Anything but Sweet 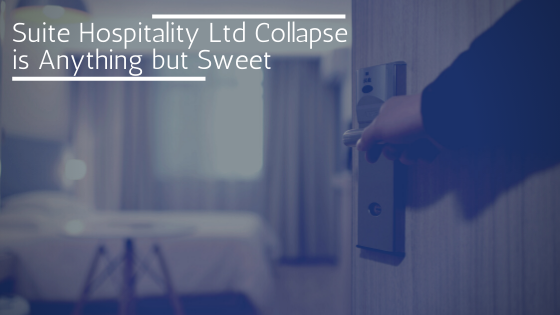 Hotels have their ups and downs, as do the lifts which carry their visitors from the reception to their rooms and back again. However, Suite Hospitality Ltd found the pandemic a crisis too vast to surmount, causing it to collapse into administration, with a string of debts left in its wake.

We all like to keep a lid on costs and avoid the holiday bill from being outrageously long when payment is due, but what happens to an established hotel chain when fewer of us are spending our money staying in hotels to begin with? Suite Hospitality Ltd is what happens in this case, as it just collapsed into administration.

Hotel chains such as Suite Hospitality offer a case study of the impact of COVID-19 on hospitality. The way hotels have traditionally thrived is through welcoming hundreds of occupants to stay for a short term throughout the year, but especially during holiday periods. It’s a service that seemed unlikely to be put in peril unless some major catastrophe made venturing in the great outdoors unsafe for some reason.

PwC estimates London hotel occupancy fell to as low as 28.8 per cent in 2020, the lowest rate ever seen since records began in the 1970s. The UK at large saw occupancy rates in hotels tumble to 37.6 per cent in the same year, as the government urged UK citizens to stay at home and supress the COVID-19 infection curve. Low occupancy translated into lower revenues, leaving chains such as Suite Hospitality vulnerable to collapse unless the economic climate changed drastically.

However, the chain collapses into administration, leaving debts of over £4 million to an array of unsecured creditors, according to joint administrators. This comes after Companies House accounts from 2017-18 showed that the chain ran up net current liabilities of roughly £2 million each year. Accounts beyond 2018 are unavailable, as they are overdue, as of August 2021, another sign of the financial strains.

As the example of Suite Hospitality Ltd shows, the pandemic caused the chain’s debt burden to virtually double in just a few short years. Debt in itself isn’t necessarily a negative, so long as a business is able to generate sufficient revenues to ultimately pay down those debts, even if pay day remains sometime in the future.

The pandemic is a perfect storm for businesses such as hotels. A persistent lack of custom represented a permanent hit to finances which couldn’t be recovered from, even as restrictions have lifted. Occupancy is likely to have risen again since these restrictions began to be unwound, but unsustainably high or rapidly growing debt burdens can be a death knell to weak businesses one blow away from complete collapse.

However, just because Suite Hospitality fell into administration due to the pandemic doesn’t mean that it can’t be a successful business. There is every possibility it could be revived or put to better use through asset stripping by a new investor. The UK is one of the most popular tourist destinations in the world, and a resumption of global travel combined with an increasing appetite for staycations domestically could fuel a new boom for hotels. It’s all just a matter of timing!

No Responses to “Suite Hospitality Ltd Collapse is Anything but Sweet”