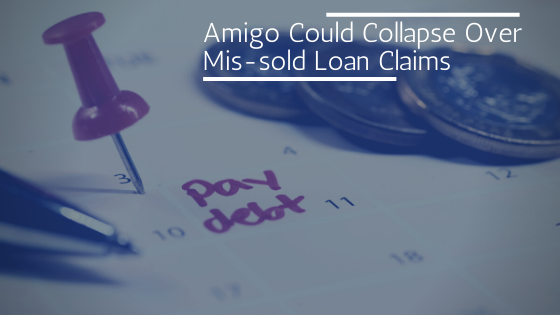 In the aftermath of the financial crisis, the UK began to enter a protracted period in which real wages were frozen in nominal terms or growing so slowly that inflation caused them to fall in real terms. In order to sustain the lifestyle many had grown accustomed to in the pre-2008 era, many turned to lenders such as Amigo for help, but now Amigo could face collapsing amid claims of mis-selling loans.

When debts come due

Amigo, otherwise known as Amigo Holdings officially, was launched in 2005, as the UK economy was saturated in credit during the consumer-led housing boom of the 2000s. One of the many issues which became a pervasive problem before, during and after the Great Recession of 2008 was the increasingly common practice of lenders reaching out to those with poor credit to offer loans.

After almost two decades of appealing to this niche as a provider of guarantor loans, Amigo is learning what it is like to be indebted for a change, with the lender having to put aside £345 million in compensation to customers over mis-sold loans. Such a hefty bill, on top of the £319 million spent simply processing such claims helped push Amigo to an eye-watering loss of almost £284 million in total.

The lender was known for offering loans with interest rates as high as 49.9 per cent, but fell foul of the Financial Conduct Authority (FCA), who published a letter of concern over a scheme of arrangement proposed by Amigo back in March 2021. In the FCA’s view, a loan would prove unaffordable in the event that the borrower has no option but to borrow even more to make repayments, or if essential bills prove unpayable.

Many are unlikely to mourn the loss of Amigo, as its potential departure from the world of lending could represent the consequences of lending to those on poor credit. A world of easy credit offered to borrowers who might be less able to repay their loans than other people would risk sowing the seeds of a new credit bubble unless correct oversight is carried out.

UK workers continue to see pay packets remaining below the levels seen in 2008 in inflation-adjusted terms, but that doesn’t mean investors aspiring to help provide credit in the coming years need to cut corners in order to do business. To be a successful lender in the post-COVID space relies more stringent requirements and to learn from the mistakes from the likes of Amigo.

In this case, Amigo was less a victim of market forces or the COVID-19 pandemic as many businesses have been, but rather its very approach to business proved costly. Its tendency to provide loans without adequate scrutiny of a potential borrower’s ability to repay their loans adequately may have been a trigger for its fall. Investors of the future will do well to start their lending practices on a sounder footing to aid a more sustainable business expansion and a less imbalanced credit market.

No Responses to “Amigo Could Collapse Over Mis-sold Loan Claims”