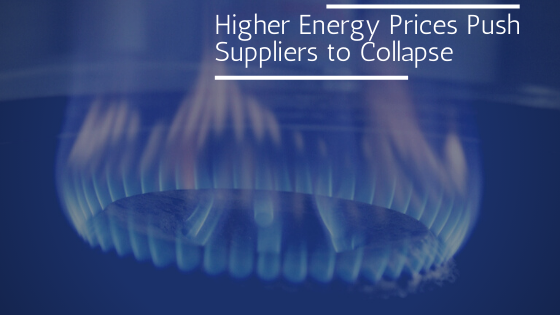 The UK energy markets lost two smaller-sized suppliers in the form of PfP Energy and MoneyPlus Energy last week, as natural gas prices leapt to fresh highs. The squeeze is on for smaller suppliers, largely as they are struggling to contain higher energy costs, while a cap remains in place on energy tariffs, which won’t be removed until October 2021.

Natural gas is one of the UK’s prime sources of energy, sourced largely from the North Sea or imported from other oil and gas-producing nations. The losses of PfP Energy and MoneyPlus Energy results in an estimated 100,000 customers now having to switch to a new supplier, in a country where consumers have access to between 60-85 suppliers in total.

While the Big Six suppliers dominate with high revenues and are more shielded from the turbulence experienced in the sector, smaller suppliers must compete to offer the best deals while making enough to turn a decent profit. Ofgem, the UK’s official energy regulator, reported that 76 per cent of UK consumers are satisfied with their suppliers overall. This suggests a sizeable chunk of UK households feel more or less content with providers, but almost quarter of people who might be getting that itch to see what other providers have to offer.

However, when separating the big suppliers from the small, an intriguing gap develops. While 75 per cent reported they were happy as customers of the bigger suppliers, the smaller suppliers impressed consumers even better, with an approval rate of 80 per cent. This suggests that if you wish to make an investment and buy into the energy market in the wake of a collapse, it still pays to start small, as it might make it easier to provide a better deal for your customers. Getting into the energy sector has seemingly never been such a gas.

As noted, the two latest collapses to strike the energy sector were small-sized firms, suggesting that the risks are every bit as great as the rewards when acquiring smaller energy firms, as one built from the assets of a past business you’ve found. The reality is that gas prices remain significantly higher as of September 2021. A cap on energy tariffs remains in place until October 2021, so high prices could prove to be the last straw for many small players.

At present, gas prices sit at 136.68 pence per therm, according to commodity analysts ICIS. Electricity prices in general are also on the increase, hitting an estimated 13-year high in 2021. Costs are reported to have risen due to falling wind power generation plus strong demand on the gas side of the market. The coming weeks and months will be pivotal, as the UK enters a new winter with high energy costs. Amidst this, suppliers face the prospect of having to compete for the lowest prices without hitting their bottom lines or going bust altogether.

How will you plan to help the UK keep the lights on, all while delivering healthy profits and offering deals which will attract the most customers? The energy markets are a bustling place as of 2021, and as the rising energy prices show, a competitive one which requires nerves of steel to navigate. Could you outperform your rivals, having bought the right assets or distressed businesses here?

No Responses to “Higher Energy Prices Push Suppliers to Collapse”