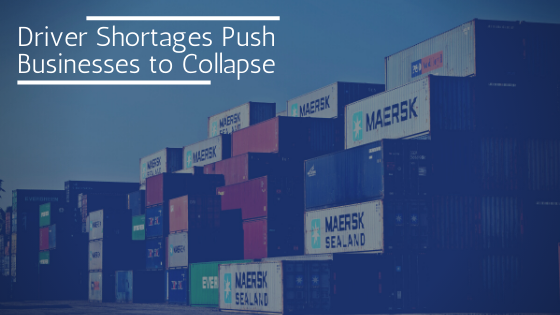 Before Brexit and the COVID-19 pandemic, the UK had high levels of net migration, attracting the best and the brightest to carry out jobs including truck driving to help keep supply chains moving. Now, as the UK recovers from the pandemic, a shortfall in truck drivers threatens the health of businesses.

In the months before COVID-19 hit British shores, the UK boasted an army of truck drivers numbering between 300,000-350,000 on a quarterly basis. By mid-2021, this number had fallen to just 236,000 in the three months from April to June. The industry claims the UK now faces a shortfall of 100,000 drivers and hauliers.

While the Road Haulage Association (RHA) claims drivers retiring is the most common cause of drivers leaving the sector, Brexit was the second most-common cause of this exodus. The pandemic was another such cause, but many drivers, who have traditionally been hired from abroad, might have though twice about entering the UK labour force, as the UK’s relationship to the EU became more distant than any time since the mid-1970s.

This decline in the number of hauliers coming to work in the UK has had spill-over effects, resulting in the collapse of a food distribution business. EVCL Chill Ltd, which recorded annual turnover of £167 million in 2020, collapsed in recent weeks, citing a loss of contracts and shortages of drivers. Without adequate supplies of labour domestically and from abroad, the lifeblood of this healthy business effectively dried up in a few short months.

A chronic lack of hauliers in the coming years could have a profound impact on such businesses in the future. The UK is especially vulnerable to trade-related fallout during any economic disturbances, but the country’s reliance on imports for food and other goods makes it all the more important to ensure a smooth running of supply chains.

The UK imports a large amount of its food, and if a shortage of drivers persists, supplies to retailers is likely to push up prices across the board. The implication of higher prices feeds into the narrative that Brexit and the pandemic could lead to constrained supplies and bottlenecks in specific places, pushing inflation dangerously above the two-per-cent target set out by the Bank of England.

Higher than expected levels of inflation would prompt the BoE to consider raising interest rates sooner rather than most industrialised nations, tightening access to credit for businesses and households. What starts with a lack of drivers spills over into collapses of large businesses related to distribution. These links in the chain failing one after the other lead towards higher inflation and potentially tighter business conditions, which may yield further collapses, as businesses with more precarious finances might be pushed over the edge. At this point, assets from such collapses could be yours for the taking, so long as you’re in a position to seize them.

No Responses to “Driver Shortages Push Businesses to Collapse”