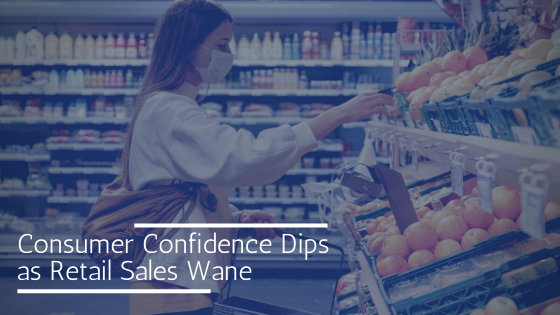 Anyone looking for rays of light in the beleaguered retail sector will be sorely disappointed as not one but two pieces of data point to weakening consumer spending and tough times ahead for retailers on and off the high street.

Bad news often comes in threes, but in the case of British retail, a double-whammy of bad news has been served up recently, as consumer confidence as measured by GfK dropped for the third month in a row in October, while Great British retail sales fell unexpectedly in September. GfK, which has been measuring the mood of shoppers since 1974, claims the October confidence reading fell to -17, having peaked out at -7 back in August.

It’s hardly a surprise, given that retail sales for the month of September recorded a decline of 0.2 per cent year-on-year, suggesting consumer spending is being constrained and shoppers are turning their noses up at fresh spending for the time being. The drying up in overall sales is somewhat two-sided, with fuel sales remaining in growth, as concerns over petrol and diesel supplies made headlines in recent weeks. However, a drop in various household goods and non-food retailers dominated the picture, pushing total sales lower for the month.

As the GfK consumer confidence figures refer to sentiment the month after these latest retail figures, there’s every possibility of yet another downbeat figure for October. With consumer spending being a significant driver of economic growth, news of a persistent decline in sales volume will concern retailers who have been just about managing in recent months, with a resumption of trading.

Retail on the ropes

Economic conditions for retail could be about to get a whole lot harder, not only due to supply and demand constraints related to the pandemic. Brexit has disrupted the UK’s supply of labour, meaning there are fewer truck drivers around to haul goods in good time. Fewer goods with high demand, along with businesses struggling to fill vacancies, is expected to put upward pressure on inflation, after a generation of relatively modest price rises.

Higher inflation for longer could trigger the Bank of England to raise interest rates faster than expected earlier in the year. For struggling retailers with rent to pay and demand withering, higher interest rates are another headache to cope with. Higher rates feed through into higher mortgage payments and discourage people from borrowing and spending even further in favour of saving.

However, this cloud hanging over retail could just be a short cyclical downward trend, before another bounce-back in the next year. This means many retailers could collapse in the short term, but open up acquisition opportunities for you to capitalise on, just in time for the next revival in sentiment. As with many things in the economy, it’s all in the timing. Get in too soon and risk being caught out by a downward lurch. Wait too long and you could miss the next big retail success story of 2022 or beyond.

No Responses to “Consumer Confidence Dips as Retail Sales Wane”