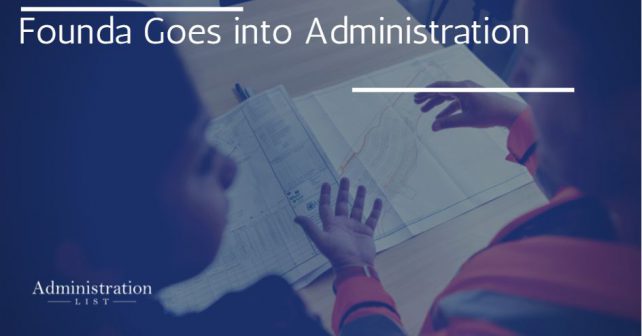 Nottingham based Founda was incorporated in 2008 and has been trading for 22 years. It is a specialist civil engineering company that provides piling services, including open site piling, restricted access mini piling and level innovative piling slabs. The firm recently went into administration on March 30th 2022.

Incidentally, it was only last year that Founda bought out Derbyshire piling contractor, All Foundations, which had itself collapsed as a business. The COVID-19 pandemic had a negative impact on their business revenues. And so, the firm was handed over to administrators, FRP Advisory, last August. It was then purchased by Founda for £180,000 in a pre-pack deal and run by previous All Foundations finance director, Jonathan Davis and operations director, Neal Willis. Four of the directors at Founda worked within senior roles at All Foundations and three of them left their posts within weeks of the takeover.

Founda meets the same fate as All Foundations

Unfortunately, less than eight months after purchasing the £13 million turnover Derbyshire firm, Founda has met the same fate. It is no surprise when one takes into account reports of continuing cash pressures as a result of finance costs and ransom creditors leftover from All Foundations.

FRP advisory also reported that Founda was in debt to HMRC and had overdue creditors. As a result, there was no option but to sell the business and its assets to a third party. However, there were attempts to save the organisation through cash injections. One ex-director even pumped £150,000 into the firm. But this simply was not enough. The company now owes approximately £880,000, including a £43,000 bounce back loan. Plus, £97,000 to All Foundations in administration. It has also been documented on Companies House, as of 14th April 2022, that Founda experienced a loss of around £60,000 in the five months leading up to the end of February 2022.

Now Founda has been bought by the £20 million turnover organisation, Carpenter Build (CBL) and its subsidiary Carpenter Foundations. With approximately 100 staff and a property portfolio of over £200 million, this Liverpool based firm agreed to a pre-pack deal costing around £105,000, including plant and equipment at £65,000. All 33 employees working for Founda are now employed by Carpenter Build. This was ensured under the transfer of undertakings (TUPE) which is an employment protection regulation that makes sure all employees are well looked after.

Are construction related businesses in trouble?

Creditsafe, the worldwide business intelligence experts, who specialise in business credit checking and all round B2B solutions, has reported that 24 construction related businesses were pulled into administration in March. This total alone was higher than any month in 2021 and may reflect an increasing problem for businesses of this type.

An “ex-director” invested some £150,000 during this period to “alleviate the pressure on cashflow”, according to the document. A further “substantial cash injection” was required, although this was not forthcoming from any source.

The company’s 33 permanent employees have all been transferred to the purchaser under the transfer of undertakings (TUPE) – an employment protection regulation.

It was then bought by Liverpool-based construction firm Carpenter Build (CBL) and its subsidiary Carpenter Foundations. The £20m turnover Carpenter Build buyer, which employs around 100 staff and has a property portfolio of more than £200m., is this time around an unconnected third party.The pre-pack deal cost the Liverpool firm just over £105,000.

Derbyshire piling contractor All Foundations (UK) was first placed into the hands of administrators FRP Advisory last August after being hit by “significant disruption” to its revenues during the pandemic. It was sold for £180,000 in a pre-pack deal on the same day to the Nottingham business Founda, run by former All Foundations directors finance director Jonathan Dennis and operations director Neal Willis.

No Responses to “Founda Goes into Administration”